The United Holy Land Fund (The Fund) was conceived in the aftermath of the 1967 war which sent tremors in the Arabs psyche in general and the Palestinians’ psyche in particular. The 1967 defeat finally convinced the Palestinians at the time to take matters into their own hands and work to resurrect their identity and pride. That sparked the Palestinian awakening everywhere after nearly two decades in slumber, submission, and decay.

The swift and total Arab defeat discredited the idea of depending on others to save us and resurrect our pride and dignity. We had to rely on ourselves. That feeling of self-reliance seeped into our psyche here in America and compelled us to seriously think of how we could share the fruits of our success with those who were less, much less fortunate. That led to the vision of creating an apparatus that would allow us to take on the awesome responsibility of lending our support to those Palestinians who found themselves dispersed and trapped with no future to look forward to.

After some thorough analysis of the options available to us, we finally zeroed on creating a charitable tax-exempt entity through which we could support the Palestinians back home, lessen their plight, open up opportunities for them  by rewarding their talents and academic excellence. And meaningfully fulfill our philanthropic goals. These charitable goals normally reflect the events and situations that shaped our lives and the values that are important to us.

It was not until July 31, 1968 that the Fund came effectively and legally into being.  On that date, we received the blessings of the IRS which determined that we were truly a charitable organization and hence deserved the status of tax-exemption. July 31, 1968 became a milestone.  On that day, we launched the Fund and started reaching our donor community.

In about a year from now, the Fund’s 50th anniversary will be upon us. We can hardly wait to celebrate it with much pride.  It did survive despite some almost insurmountable challenges. It remained independent, non-political, and faithful to its philanthropic mission. Its scholarship program has been expanded to include nearly 500 students in seventeen Palestinian universities in addition to the continuous support of the same number of orphans. Some of the scholarship recipients attribute their success in life to our support. This kind of feedback gave the Fund a perpetual lease on life. Reliable funding of our programs is an ongoing challenge as we struggle to stretch our resources to meet increasing demands due to the unpredictable environments the Palestinian people live under.

The joy we collectively feel when we learn that some of our scholarships’ recipients graduated or found employment is boundless. Some of them attained national prominence and travelled all the way to the US to express their deep gratitude. That is what philanthropy is all about. It’s not just about “giving back” to the community that supported us when we were growing up in Palestine but also about “giving back” to our community here in our new home. We need to help members of our donor community to experience the joy of giving while alive. As Sir John Templeton, one of the wisest philanthropists of the 20th century, once said, “If you are giving while you’re living, you are knowing where it’s going.”

Finally, while the conception of the Fund may be credited to one individual, the Fund would not have survived for nearly 50 years without the unwavering help and dedication of an army of volunteers.  As they say, “It takes a village…! “  In our case, it took a large number of villages to keep the Fund on a sustainable path. Our volunteers heard our call and stepped up to the plate opening their wallets and their hearts. We salute all of them and hope that their offspring and other family members follow their example and perpetuate the philanthropic mission of the Fund during their lifetime and beyond by leaving a financial legacy that keeps their name alive.

We view philanthropy as a moral obligation of those of us who had been talented enough or lucky enough to accumulate a decent amount of wealth to share part of their wealth with their favorite charities. We hope that you place the Fund on top of your list.

Philanthropy, for some of us, often seems to be egotistical–of course much of it is.

There is a generous side to human nature, but it is only one side. Yet it is still philanthropy even if we insist on putting our names on it to enjoy the rewards of earning a reputation for generosity. Besides recognizing the generosity of our donors, their recognition may inspire and move others to emulate them and enrich their souls. Someone once said “giving is good for the soul!”

Experience the joy of giving back to your community and family. As Sir John Templeton, one of the wisest philanthropists of the 20th century, once said, “If you are giving while you’re living, you are knowing where it’s going.”

Giving is good for the soul.

Giving back to society(s) which made it possible for us to attain a level of education and a level of wealth that were beyond our dreams.

The objective is to use your philanthropic resources efficiently and to select the right gifting mechanism which would give you the highest level of satisfaction and the maximum amount of flexibility and control at the lowest possible cost.

The mechanism we are advocating here is for our donors who have the financial capacity to do so continue giving even after they depart. We are aware of the fact that the vast majority of our donor community is Palestinian –Americans. They like most Palestinians believe the more children they have the better. That may give strain on their ability to support other kids who were not that fortunate. They stayed behind and lived and still live under occupation. We are urging you to extend your generosity to at least one of those kids by supporting him or her to go to college that will enable them to be productive members of society. 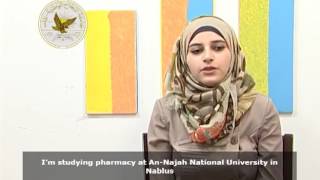 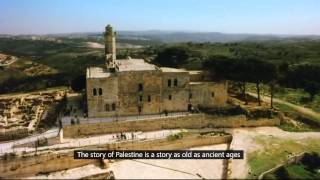 I'm Wassim Abdallah. I study in the Arab American University of Jenin - Palestine.
I study computer system engineering in my third year.

I have no words to tell you how much we feel happy and hopeful when you help us. People like you should be respected from everybody. I would like to thank you as a group of people who care and think about others.

I like the idea of your association, by your help you give us the power to continue and go on with our ambitions.

Me as a young man , I live in a big family we are eight. my father is an electrician he work all the day in order to give us the opportunity to study in university , actually many times I was thinking to leave university because of the fees of my studying which is so expensive . My father faced a very critical economic situation in his life, i'm number four who enter universities so we are talking about a big number of money.

which made his situation very bad. But by your support you give us and give me the support
and the first step to continue .

I would like to say that you don't just help me, you also teach me and give me lessons in life .
To think about others and helping them . this shows how kind and great you are !

I'm 21 years old and I feel that I have a great power inside me . I participate many social youth activities and I have my own talents I like music so much , I play on violin , oud( an Arabic instrument), and drum .

I sing in concerts , and in church in all celebrations . I lead our university coral from the first year in the university which consists of 30 students how sing and play instruments. I have been in a folklore dance group (Dabkah ) for six years . This year I started to train 20 kids and start to design my own dances .

I like to paint , I'm interested in face painting , I like to challenge my self that if anybody saw my drawings he would know the person .

I decided to tell you about myself in few words in order to know that you help people who deserve your help .

Finally, I send you all our love and respect from me and my family for your help and I pray to God to bless you all and bless your work and ask for having more people like you in this world .

With all my respect,
Wassim Abdallah

Causes That Need Your Help

There are no upcoming events at this time.

The United Holy Land Fund [UHLF] is an American Palestinian charitable, Tax-exempt, humanitarian nonpolitical organization. It has been diligently working to alleviate the plight of needy Palestinians since 1968, and in full compliance with the federal, state and local governmental rules and regulations.